Probably the two worst stains a home owner could discover on their siding are from artillery fungus or dried egg.The discovery of both of these stains tends to be too late in most cases. Egg is most successfully removed when it’s still wet, and artillery fungus can only be removed when the spores have just landed on the siding. Removing dried on egg is possible but it will leave a shadow behind.

At See Dirt Run!™ we have the ability to use cold, warm or hot water and low pressure to wash vinyl, aluminum, and brick homes with. This preserves the integrity of your siding. Think about it. You wash your dishes in warm or hot water don’t you? It’s a fact that warmer water gives you better results than cold water does.

Artillery fungus is tough to fight 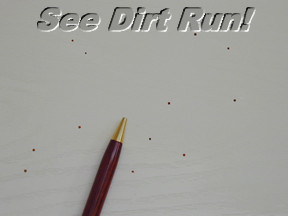 If your siding, car, fence or any other surfaces around your house have broken out with a rash of black or dark-brown specks that do not want to come off, you are probably at war with something called artillery fungus. It has become increasingly common in recent years, according to experts who have been seeking ways to control and eradicate it.

Artillery fungus, also called shotgun fungus or Sphaerobolus stellatus, usually originates in wood-chip mulch that is used around shrubs, flowers and other plants. Wet, rotting mulch breeds small mushrooms that shoot off spores for distances of up to 20 feet. The spores, which are sometimes mistaken for insect waste or bits of tar, cling tenaciously to surfaces such as house siding.

“It’s just like Super Glue,” said Don Davis, professor of plant pathology at Pennsylvania State University’s College of Agricultural Sciences. Davis and Larry Kuhns, professor of horticulture, have been leading a five-year study of the fungus, and they expect the study to continue for several more years. Davis said he gets 20 to 30 calls a week during the fungus’ most active seasons – generally spring and fall when temperatures range between 50 and 68 degrees. Callers are steered to Davis and Kuhns through the college’s Internet site: Artillery Fungus Information.

Davis said the rapid spread of the fungus and the growing number of fungus-damaged homes appear to be linked to the growing use of mulches made from recycled hardwood scraps and tree stumps.

Homeowners can take a key step to control artillery fungus by cleaning up wood-chip mulch around the house and disposing of it before the shooting starts again in April or May.

Here are some additional tips:

At See Dirt Run!™ our log home and log cabin restoration, maintenance and refinishing services range from specialized wood care for log cabins and log homes to cedar and redwood homes, to decks of all kinds.

We service the following areas: MD, VA, WV, DE, PA and beyond.